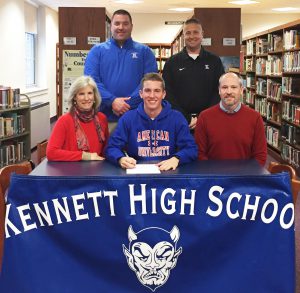 Braden Miller has been playing soccer for 15 years. In his freshman year, Braden was faced with a life-changing decision. Would he play with his friends at high school or follow his dreams of earning a spot on a Division I soccer team?

The decision arose when Braden earned a coveted spot on the FC DELCO USSDA Academy 97/98 soccer team, which is part of the U.S. Soccer Development Academy (USSDA). As a player in the USSDA, he had to commit full-time to FC DELCO and forgo his opportunity to play for the Blue Devils at Kennett High School.

“I had to choose between playing with my friends at Kennett High School or taking the opportunity to compete against the top 1 percent of players in the country with the USSDA,” stated Braden. “It was a difficult decision, but choosing to play for FC DECLO was the right choice.”

Playing at the Academy level placed Braden in the player pool for the U.S. Men’s National soccer team. The level of instruction and dedication provided by Head Coach Mr. Sean McCafferty and Assistant Coach Mr. Jonathon Rhodes helped develop Braden into one of the top center backs in the country. As a player with great defensive awareness and vision, the six-foot-one Braden hopes to help the Eagles in the defensive end.

Braden is not only an outstanding athlete but also a dedicated student. He has been inducted into the Kennett High School National Honor Society and was voted Most Athletic among his peers. Braden takes time out of his busy schedule to volunteer for the Muscular Dystrophy Association and coach Kennett Area Parks and Recreation basketball teams.

“I want to thank my parents for all of the time and support they have put into my soccer career. Without their help I would not have made my dream of playing Division I soccer a reality,” Braden said.

Braden will study business administration and leadership at American University.