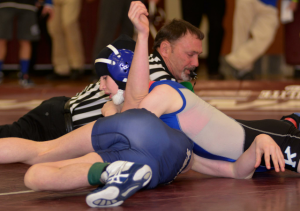 Her love for wrestling began when she was just six years old. After watching her cousin wrestle for Kennett Middle School, Mary asked her parents if she could wrestle too.

“My parents have always been very supportive of my decision to wrestle,” Mary explained. “They agreed to let me wrestle as long as I committed to the sport for an entire year. After the year was over, I could decide to continue or quit.” 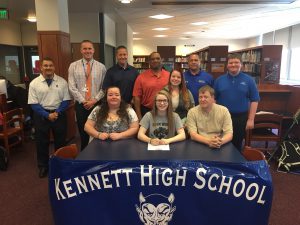 s, has won eight state championship titles, and has recently been awarded an athletic scholarship to continue her wrestling career at Ferrum College this fall.

“During the many years I have known Mary she has proven herself to be resourceful, hard-working and self-reliant,” said Kennett High School wrestling Coach Mr. Tyrone Johnson. “From her days in the youth program to this senior year, she consistently worked hard and stayed focused on her goals, whether in the classroom or on the wrestling mat.”

Dedicated to the sport she loves, Mary wrestles year round with Kennett High School’s wrestling team and an all-girls club team, Team Pennsylvania. In her free time, Mary volunteers in a youth wrestling program, acting as a role model to aspiring wrestlers.

“So many people told me wrestling was not for girls,” Mary began. “I didn’t listen to them. I pushed myself, and now I have reached my dream of wrestling in college. For any girl who wants to wrestle – you can do it, don’t let others bring you down!”

The Kennett Consolidated School District is proud of Mary’s accomplishments.