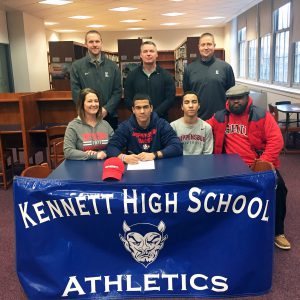 A dedicated and hardworking player, Myles has had an outstanding athletic career to date. Myles football athletic honors include being named Offensive MVP as a junior, Impact Player of the Year as a senior, and earning Ches-Mont All-League Honorable Mention designations as a sophomore, junior, and senior. In addition to playing football, Miles was also a member of Kennett High School’s lacrosse team his freshman and sophomore years, where he was named Defensive MVP as a freshman.

Myles will study business at Shippensburg University and plans on pursuing a career in real estate.

Myles is ready to take his athletic career to the next level as a Shippensburg University Raider, and is excited to be part of team with players who share his same goals and aspirations.

Kennett High School senior Madison Bowe will continue her education at Swarthmore College where she will study cognitive science and play on the women’s softball team. 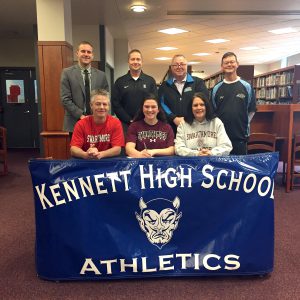 A four-year member of Kennett High School’s varsity softball team, Madison has had an outstanding athletic career to date. Her relentless dedication and strong leadership skills contributed to Madison being named team captain both her junior and senior year. Her softball athletic honors include being named to the First Team Ches-Mont Second Softball team in 2015 and 2016, and playing in the 2015 and 2016 Carpenter’s Cups. In addition to playing for Kennett High School’s softball team, Madison plays year-round for the Fusion Fastpitch 18U travel team.

Madison also was a member of Kennett High School’s volleyball team, freshman and sophomore, and swim team as a junior.

Madison’s athletic successes are mirrored by her academic successes. Madison was the recipient of the 2015 Phillies Extraordinary Scholar Award and the Achievement Academy National Social Studies Award. Madison is a National Honors Society member, and has earned Distinguished Honors every semester since her freshman year.

An active community member, Madison is involved with the Mock Trial Club, Kennett Television Crew, Academic Team, and Ski Club. She is the founder of Woof’N Good Dog Biscuits, an organization that donates proceeds to the Society for the Prevention of Cruelty to Animals. Madison is also the proud winner of the Kennett Chocolate Lover’s Festival three years running.

Madison credits Kennett High School’s sense of community as the foundation that has built some of her most treasured memories. She would like to thank her family, friends, and coaches for their support throughout her high school career.

Madison is excited and proud to have the opportunity to play softball at Swarthmore College while studying cognitive science with a minor in history.

Congratulations to Mitch Kosara and Kerry Tomasetti on their “All Ches-Mont Selections” and a big shout out to the entire boys basketball team for being awarded the Sportsmanship Award for the American League. Read more about it here: Link

Congratulations to the Boys Tennis Team on their sweep of Coatesville High School in their match under tough, windy conditions. Big wins from:

The Division of Child Neurology at the Children’s Hospital of Pennsylvania will run its annual Neurology High School Scholars Program beginning in July 2017. Three high school students will be selected to participate in a basic science or clinical research project under the close guidance of a mentor in Neurology or Neuroscience. More information about this program as well as an application form are available in the Kennett High School counseling office. The deadline for applying for admission to this program is March 31, 2017. The program is open to sophomores, juniors, and seniors. Acceptance into this program is highly competitive.

The Philadelphia Professionals Chapter of the National Society of Black Engineers (NSBE) is pleased to announce the awarding of scholarships for African American college-bound students passionate about science and engineering, and planning to major in a STEM field (Science, Technology, Engineering, Mathematics). Interested students should check the Scholarship List in Family Connection for more information. The deadline for applying for this scholarship is April 8, 2017.

Kennett High School is honored to invite the entire community to view Mr. Carl Wilkens’s documentary “I’m Not Leaving” on Thursday evening, April 6, from 7:30 to 9:00 in the school’s auditorium. The video presentation will be followed by a Q & A session and book signing.

Former humanitarian aid worker Carl Wilkens will be also visiting the students of Kennett High School on April 7, 2017 to discuss his experiences in Rwanda during the 1994 genocide. Mr. Wilkens was the only U.S. citizen to stay behind when foreign nationals were evacuated with many of the UN peacekeepers.

Mr. Wilkens’ message is one of hope, empathy, and determination to make a difference. The stories he shares highlight building bridges of peace and focus specifically on those who stood up against violent forces to save lives. Part of his presentation includes his recent trip to Rwanda in 2016 and the recovery he has witnessed over the past decades. Last year alone, Mr. Wilkens shared his story with over 20,000 people.

“We want to make this a special week to celebrate our unity as a school, and having Mr. Wilkens present to share his message of tolerance, kindness, and service is the perfect culminating event,” said Dr. Jeremy Hritz, Kennett High School Principal.

From the Guidance Office

Applications are now available for the Sara Manning Scholarship. Two, $1,000 winners will be selected from the Kennett High School Class of 2017. Interested seniors should check their Family Connection email accounts for more information or stop in to the counseling office to pick up an application. The deadline for this scholarship is Monday, April 17.

Any current senior that is interested in attending Delaware County Community College that has not yet applied can visit with a representative from the Delaware County Community College admissions staff on Thursday, March 23 from 9:30 a.m. – 11:00 a.m. in the Kennett High School counseling office. Students can complete an application and receive an admission decision on the spot during this time.

Student bills have been mailed home. If you are planning to attend the prom, please make every effort to make payment no later than Friday, March 24th. As long as there is an outstanding bill, prom tickets cannot be purchased.

Checks made payable to KCSD Activities may be mailed to the Attention of the Principal’s Office at:

Or, you may deliver payment and/or returned textbooks to Mr. Jones in the main office. All cash payments must be for the exact amount. Do not leave the office without a receipt.

Concert will include the premier of the specially commissioned anthem. Kennett High School and Kennett Middle School select choirs will also perform, along with mass choir and orchestra.

This year’s concert will benefit Camp Sunshine of Casco, Maine — the terrific camp for families of children with life-threatening illnesses.

The freshman class will be selling donuts in the lobby before school on Friday, March 17th for $1.00. If you are looking for a sweet breakfast, stop by and buy one.

Class ring orders will be accepted and measurements taken on Tuesday, March 14th from 5-7pm, as well as Wednesday, March 15 during all lunches in the cafeteria. Mr. Ferraro from students services company will be there to answer questions and assist you with your order. All orders made on these day will be delivered in the fall. Ordering materials are available in the main office.

Audiences will be treated to such numbers as “Show Off,” “As We Stumble Along,” “Fancy Dress,” and “I Do, I Do in the Sky.”