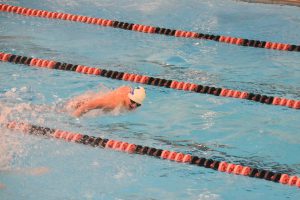 Emils has been swimming competitively since he was six years old. Swimming offers both an individual component and a real team spirit which is what sets the sport apart for Emils.

“My proudest achievement in swimming is when I was about 12 years old,” says Emils. “There was one meet that I performed really well and improved my times significantly in all of my events. It was the meet where I realized that I could be a good swimmer and I’ve never forgotten it.”

In addition to juggling academics and swimming, Emils is also on the high school’s robotics team. Demon Robotics recently returned from the FIRST World Championships. In robotics, he assisted in the construction of the test field which allowed the team to test which parts of their creation worked well and which did not.

“My parents work hard to help me learn to balance my extracurricular activities and my academics,” says Emils. “I am learning to put academics first, but it was a tough thing to learn. There were many times when it felt difficult to think about studying after coming home from swim practice. But I am working hard and doing better at it.”

Looking forward towards life after Kennett High School, Emils is still thinking about options and looking at schools. However, there are three things that he knows for certain. “I want to major in mechanical engineering, be a member of the swim team, and be somewhere in the Northeast,” Emils says. “I enjoy building things, and testing what works and what doesn’t. That is why I want to become a mechanical engineer.”

Outside of school, Emils looks forward to attending a camp in the Catskills for two weeks every summer and spending time with his Latvian friends. He relaxes by playing video games, FaceTiming with his friends, and playing with his dog.