The 2017-2018 midterm examination schedule is as follows:

Friday, January 12th schedule. This is a full day and we will follow a Friday schedule.

The following is the ½ day schedule for January 16 to 19.

*Note that there is a 15 minute break between exams.

The school counselors at Kennett High School will be busy visiting classrooms of juniors during the week beginning January 11. Juniors will receive their PSAT scores in one meeting with directions for setting up a College Board account and linking their accounts to the free online SAT preparation program offered by the Khan Academy. A second set of classroom visits will provide our juniors with information about the SAT and ACT exams. This information will include registration directions, score sending options, and test taking tips.

The PSAT presentation was delivered to our sophomores in an assembly on Monday, December 18.

Junior planning meetings, including parents, have been ongoing. These are individual meetings held with each junior to explore post-secondary options. This meeting includes information for selecting and applying to colleges, as well as a brief overview of the financial aid process. These meetings typically last approximately 80-90 minutes. Parents of juniors are encouraged to notify their child’s school counselor if they would like to be included in that meeting.

Kennett High School Senior Emils Jurcik has signed his National Letter of Intent to swim at Division I University of Connecticut. 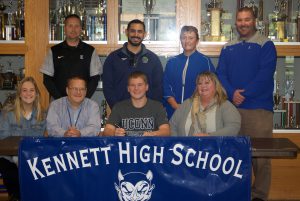 Emils has been swimming competitively since he was six years old. Swimming offers both an individual component and a real team spirit which is what sets the sport apart for Emils. He has been named to the All-State Swimming and Diving Team for his performances in the 500 freestyle and 100 individual medley, along with being named the co-winner for High Point at the 2017 Futures Championship in Geneva, Ohio.

Emils enjoyed his time swimming for Kennett High School, saying “there’s something about representing Kennett that makes me want to swim my best, and I want to carry that over to my teammates.”

In addition to juggling academics and swimming, Emils is also on the high school’s robotics team. He plans to study mechanical engineering.

“I am excited to swim for the University of Connecticut and I know it’s the right decision for me,” Emils says. “I just hope I didn’t mess up my signature.”

Emils is grateful to his family, friends, and coaches for their support in the classroom and in the pool. 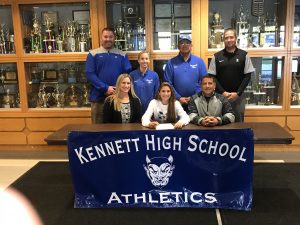 For Eliza, the best part of playing for Kennett High School was building relationships with her teammates and having supportive coaches in both field hockey and lacrosse.

Eliza’s high school achievements include the Blue Demon and Coaches’ Award for field hockey, along with being on the Distinguished Honor Roll.

Along with playing lacrosse, Eliza also coaches the Blue Demons lacrosse team and the Belles, a travelling lacrosse team. She also participates in the Big Sister Little Sister club and is a member of the Allied Health program.

“I’m excited to play for Moravian,” Eliza says. “I really appreciate all that my coaches have done for me throughout my high school career.”

Nearly fifty pieces, including beautiful wheel-thrown mugs, bowls, and vases as well as hand-built holiday pieces like Christmas trees and plates, will be available for purchase at this year’s Ceramics Sale at Kennett High School. All works were crafted by students in teacher Ms. Jodi Davidson’s ceramics classes, levels I through III. 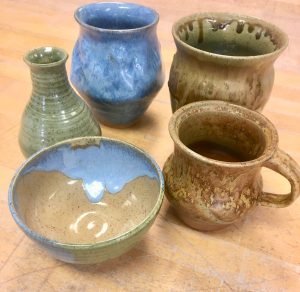 Eight years ago, Ms. Davidson and her students developed this creative way to add to their annual budget, with all proceeds from the sale helping to support the purchase of materials like clay and glaze for future projects.

Ms. Davidson noted, “The items available for sale are of the same hand-crafted quality you’d find at an expensive gallery, but we sell them for a fraction of the cost. The students have created some amazing work, and the money goes directly back into our program.” Last year’s sale raised approximately $500. 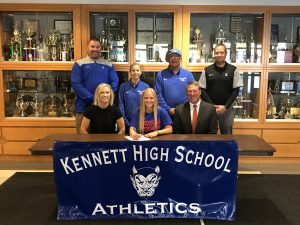 A dedicated and hardworking player, Jennifer has played lacrosse for 12 years. Her athletic accomplishments include being named to the First Team All Ches-Mont and the Second Team All-League.

For Jennifer, the best part of playing at Kennett High School was the amazing coaching staff. “I would not be the player I am today if it weren’t for Coach Watkins and Coach Carrie,” says Jennifer.

Lacrosse is not Jennifer’s only sport, she also participates in cross country and winter track, along with being a co-founder of Kennett High School’s badminton club. She is also a member of the National Honor Society and the Athletic Representative Council.

Jennifer has not declared a major at this time, but is interested in studying biology and following a pre-med track.

“When I first started playing lacrosse, I never would have believed that I’d be signing to play in college,” Jennifer says. “I’m so excited to continue playing at American University.”

Thanks to everyone’s generosity, the Students Against Destructive Decisions (SADD) Club collected more than 100 coats during this year’s Share the Warmth Coat Drive. A huge THANK YOU to everyone at Kennett High School. All coats were donated to La Comunidad Hispana. 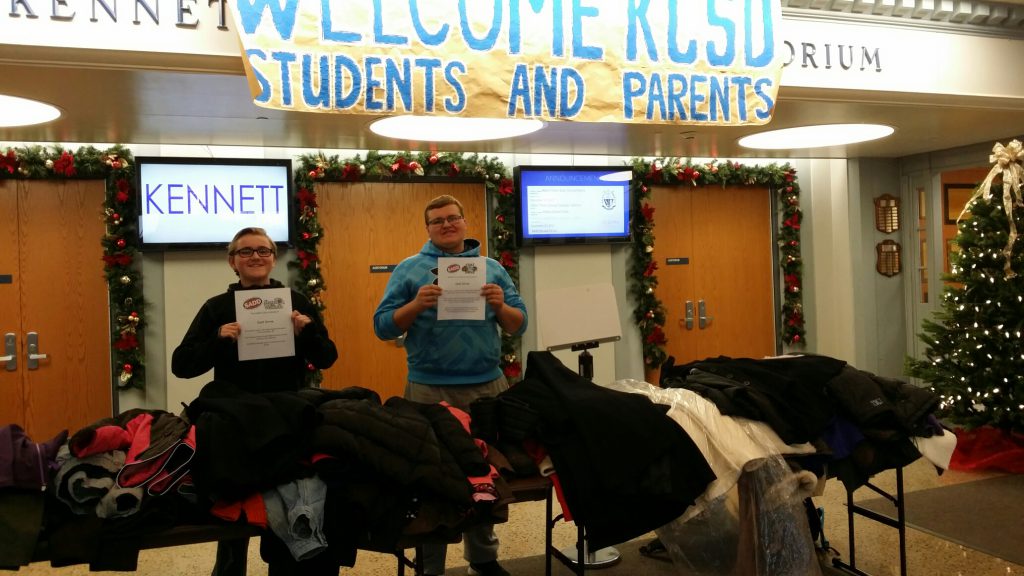 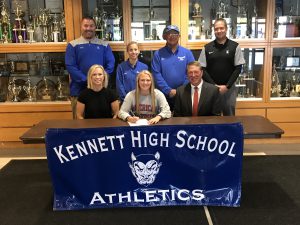 For Morgan, the best part of playing for Kennett High school was the amazing coaches and the environment they created for her to grow as a lacrosse player.

Morgan’s high school achievements include being named to Chesmont’s All-League First Team for lacrosse, co-founding Kennett High School’s badminton club, serving as a member of the Athletic Representative Council, and being a member of the National Honor Society.

Morgan has not declared a major at this time.

“I am grateful and excited to continue my lacrosse career for the next four years as an Eagle,” says Morgan.

Morgan is grateful to her family, friends, and coaches for their support in the classroom and on the lacrosse field. 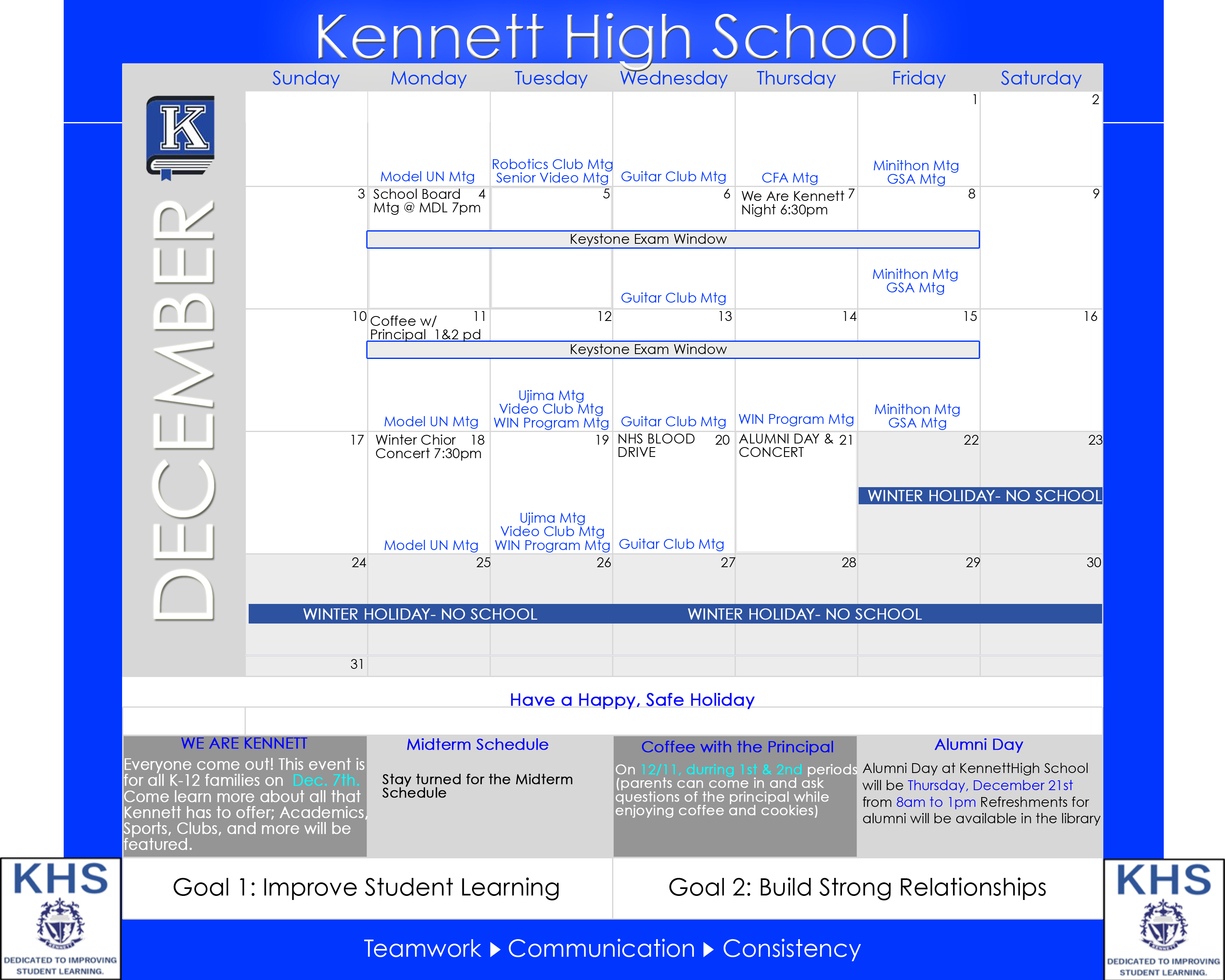 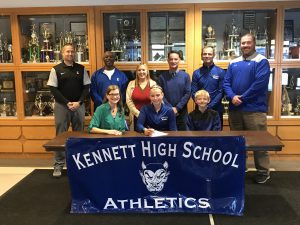 A dedicated and hardworking athlete, Nicole has run cross country for three years at Kennett High School. She has also ran indoor and outdoor track for three years.

For Nicole, the best part of running for Kennett High School have been the coaches who care about their athletes as people and the teammates who will be friends for life.

Along with high school athletics, Nicole is a member of the Fellowship of Christian Athletes, the Special Friends Club, and the Hockession Athletic Club Triathlon Team.

Nicole intends to study kinesiology to pursue a career in physical therapy.

“I am excited for the opportunity to continue both my academic and athletic careers at such a prestigious college,” says Nicole.

Nicole is grateful to her family, friends, and coaches for their support in the classroom and on the track.