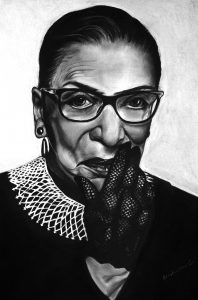 When describing why she chose the photograph on which she based her drawing, Alex said, “In today’s political climate especially, I wanted to select a figure that I look up to as a strong woman, someone with values and a strong set of principles.”

Alex has not yet decided where she will be attending college, but she has definitely determined her major: engineering.

“Maybe I’ll minor in art,” she said. “I appreciate the visual and spatial awareness required by art. It’s not all that different from mathematics and science in the way that the details and various components work together to create a whole.” 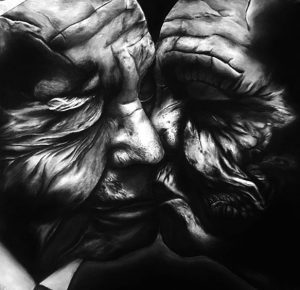 She explained, “The charcoal medium I chose really created a nice contrast and allowed for there to be more detail and depth. I chose to base my piece on the particular picture I did because I was really touched by the story behind it. I also noticed that older people are rarely represented in art, whether it’s in drawings or in the media or anywhere, so I took the opportunity to give them a place in my art that showed them as happy and in love as they are.”

Lizette will be attending Immaculata University this fall to major in business and communication, though she says art will always be important to her.

“Art has taught me so much about hard work and patience. Even though I won’t be doing art professionally in the future, I’ll still use it to foster my creativity. I’d like to have a career in fashion journalism someday, so I’ll always use art as inspiration,” said Lizette.

When asked about the inspiration for her piece, Zoe said, “I grew up listening to Bob Marley. My whole family listens to him. My mom even said I was born with his music playing.” 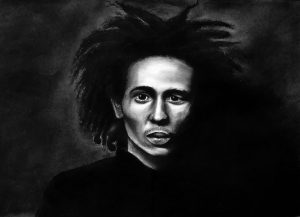 “The picture I picked to duplicate was a younger image of him — one not as many people would recognize right away. I thought it would be cool to try to draw his dreadlocks. Creating that texture is really difficult,” she added.

Zoe is headed to Jefferson University in Philadelphia, ultimately pursuing a degree in medicine, though she still plans to include art in her life.

“I think that it’s important to have a creative side, to have a different way of seeing things,” she said.

Mr. Hironimus is understandably proud of his students: “It is always special to have a student be recognized for exemplary work. This year it is especially amazing to have Alex claim her second consecutive award, a Kennett High School first, as well as to have Zoe and Lizette share the title of ‘Best in Show,’ an honor that we have received in back-to-back years.” 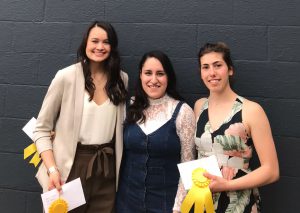 All three young artists expressed their gratitude for Mr. Hironimus.

Lizette summarized their feelings saying, “I am grateful for the past four years I’ve spent doing art, as well as to Mr. Hironimus for giving me — and all Kennett art students — the opportunity to do what he loves so well.”

The juried exhibition was held from Tuesday, April 11 through Saturday, April 27 at the main location of the Chester County Art Association (CCAA) in West Chester. The show featured nearly five hundred pieces of art from Chester County high schools, including over twenty works by Kennett High School artists.

Thirty-one members of Kennett High School’s Future Business Leaders of America (FBLA) Club attended the state competition in Hershey, Pennsylvania, April 7 through 10. In order to qualify for the state competition, students placed in the top three in online events and the top four in performance events at the regional level competitions held in December. 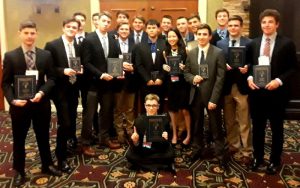 The purpose of FBLA is to prepare members for careers in business and to assist them by becoming better employees and citizens. FBLA helps students develop leadership abilities, prepares them for entry into business-related occupations, and offers a setting in which members compete at regional, state, and national levels in a business and technology curriculum.

“All thirty-one members who attended did extremely well and were terrific representatives of Kennett High School,” said Mr. Fritsch.

The Baccalaureate Ceremony, for the class of 2019, will be held on Thursday, June 6 at 7:00 at St. Rocco in Avondale.

It’s a lovely and traditional part of all graduations. In addition to attending, seniors are always part of the service as speakers, readers, ushers, musicians, or vocalists. If you have an interest in participating or questions about it, see Ms. Lamoreux in room 104.

In addition to the traditional commencement ceremony with its cap and gown and congratulatory handshakes, vale 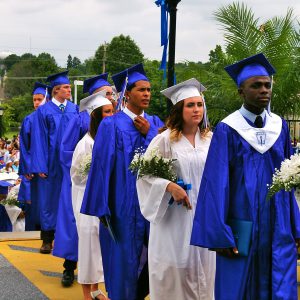 dictorian speech (or speeches) and recognition of outstanding achievements, high schools also have baccalaureate ceremonies. Formally defined as a service to honor the graduating class, the baccalaureate is a quieter, more reflective event that focuses on students’ personal growth and achievement. The baccalaureate can often be a more substantive and meaningful experience for parents and students alike.

April News … What You Need to Know 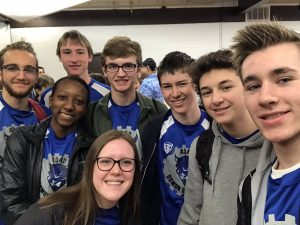 Demon Robotics is competing at the District championships today in Lehigh. Good luck to everyone!

Congratulations to the Softball team for their 7-0 victory over Sun Valley.

Scarlet Morgan, Ashley Wiley, Vanessa Woodson and Rachel Hyzny take first in the 4×1000 and second in the 4×600 at the Phoenixville Distance Project. 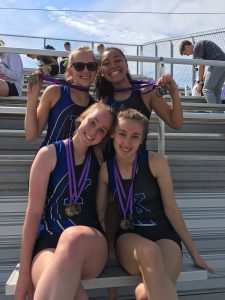 Check back throughout the month for updates and modifications! 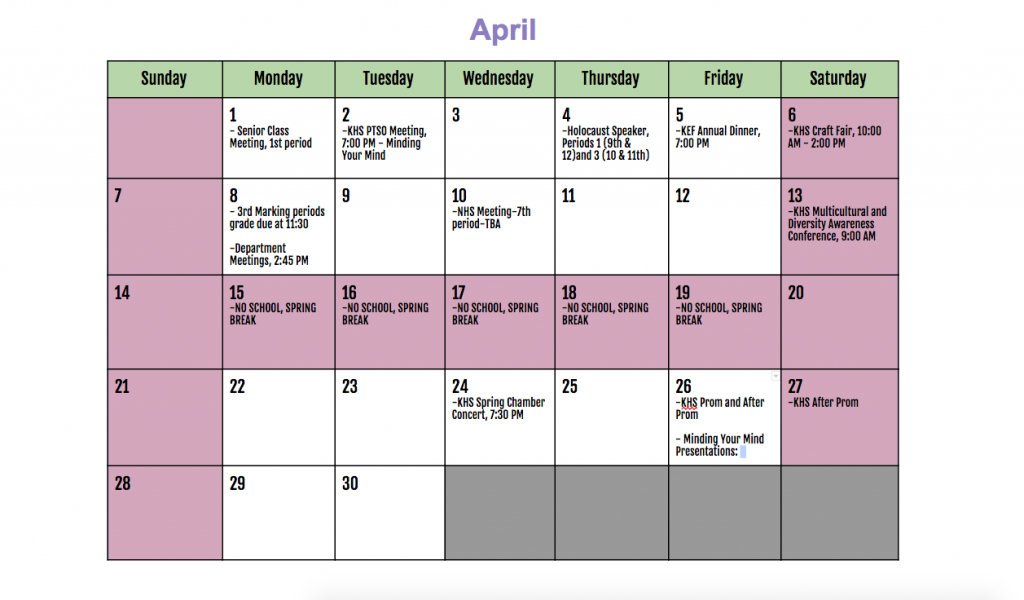 The Kennett High School Blue and White Chapter of the National Honor Society welcomed the 2019-20 inductees at a ceremony and reception on March 28, 2019.

Members of the Blue and White Chapter must demonstrate and maintain high standards of the four hallmarks of the National Honor Society: scholarship, leadership, character, and service. Throughout the year, National Honor Society members participate in service activities, including tutoring and fundraising. This year they have organized two blood drives for the American Red Cross, worked on crews for the Mushroom Festival, volunteered at Project Cure, hosted a “Senior Prom” at the Senior Center, and ushered patrons at this year’s musical Seussical. The group is also looking forward to activities in the community this spring, particularly volunteering at the Kennett Run.