On behalf of the Humanitarian Club,

Thank you to everyone who donated to this year’s food drive in memory and honor of Pat Mallon. Due to your generosity, KHS collected 1,727 pounds of food and $1154 in cash and gift cards.

Special thanks to Ms. Bell, Mr. Bewley, Mr. Duffy and Ms. Lamoreux’ advisories for each collecting over 60 cans. This year’s event was chaired by Delaney Marin Tapia and Jerry Avalos. The Fall Festival was chaired by Julia Dahms, Emma Henderson, and Carly Cicconi.

There will be an informational meeting for any student interested in Octorara’s Homeland Security & Protective Services program on Monday, December 9th during 2nd period. Please sign up in advance in the counseling office. If you have any questions, please see Ms. Morihara. For more information about the program, click here. 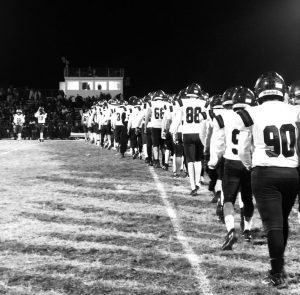 After Kennett’s football players shook hands with the victorious Cheltenham gridders following the top seeded Panthers’ 42-20 win in the District `1 5A football semifinal Friday evening, the entire Blue Demon squad walked over to the visitors’ stands, where a packed crowd of Blue Demon fans lauded their heroes with one long, last resounding cheer, accompanied by spirited music from the school band.

“I’m at a loss for words to describe how proud I am of our players,” said Kennett head coach Lance Frazier. “To come as far as we have in the past couple of years is unbelievable. It’s a testament to the young men that we have and the coaching staff. I mean, these guys are warriors – they love each other, and they love the game. “There are a lot of positives that we can take from this season – I mean, who would have thought we would have come this far, nobody believed in us [at first] but our guys wanted to be great, they wanted to be successful, they wanted to have a [coaching] staff that believed in them, and they reaped the benefits from that. I’m so proud of them.”

One of the Kennett standouts Friday evening, senior running back Garrett Cox, said, “It was great having all these [Blue Demon] fans here tonight; I even saw some fans here from other schools, like Upper Dublin. I’ve grown up with a lot of my teammates ever since we played football for the Kennett Titans youth football program when I was 10, 11 and 12 – a lot of them are my neighbors, and a couple of years ago, we really wanted to [improve] the football culture here. My freshman and sophomore years with Kennett, we had two different coaches, then last year [after Frazier took over], we played in our first district playoff game ever.” 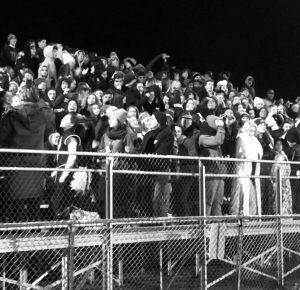 The 5-foot-11, 215-pound Cox was a potent weapon for the Blue Demons Friday evening at Cheltenham, rushing for more than 100 yards for the sixth straight week, catching several passes for solid gains, and scoring on an 18-yard run.“Garrett is a definition of an all-season football guy,” said Frazier.

The Kennett head coach also lauded the Blue Demons offensive line, which triggered two long touchdown drives – a 13-play, 63-yard march (12 of which were running plays) and a nine-play, 74-yard TD drive to start the second half. Kennett’s offensive line included senior center John Colamarino, senior guards Sam Davidson and Shawn Carroll, junior tackle Matt O’Keefe and senior tackle James Freebery. “These guys aren’t very big – when you see them in the hallways at school they might look unassuming – but they’ve got huge hearts,” said Frazier. “They’re always in the weight room, working harder than everyone else, all determination and heart, and when they go up against the Rustins and the Unionvilles of the world, they hold their own.” 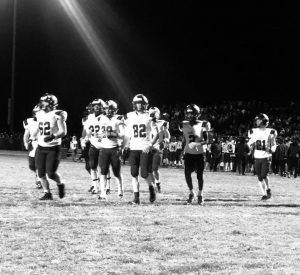 Although Kennett fell behind 20-0 early in the second quarter Friday, the Blue Demons’ offensive line helped to put together an eight-minute, 13-play touchdown drive that put the visitors on the scoreboard for the first time. And even though top seed Cheltenham pulled off a few big plays to produce a touchdown just before the first half ended, putting the hosts ahead 27-7, the Kennett stands remained packed for the second half.

At halftime, Kennett cheerleading senior co-captains Dessa’Rae Bolton and Genna Eisel pointed to the packed Blue Demon fan section – there were at least three busloads of Blue Demon fans who came to the game, plus two busloads of Kennett band members – and reflected on the visiting fans’ spirit. “I’m excited to see so many people coming out to see this team – our team has worked so hard this season,” said Bolton. 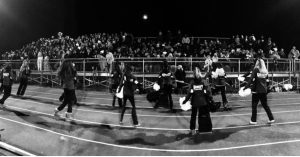 “It’s like an emotional rush of excitement every time we see our team,” noted Eisel.

Frazier said, “It’s unbelievable to see how our community has been awakened – from not being a football school, to now, when our fans didn’t leave at halftime tonight. It’s been really fun to ride this wave of excitement. I can’t wait to start next season (laughs). “The work we did in the past off-season had a lot to do with our leap forward this year. If there’s no [coaching] consistency in the program, the kids lose out in the know-how. And our seniors were a huge reason for our success this season. What a tremendous class, they really stepped up and led the way to keeping our focus. This is a special group of seniors – I wish I had them for four years.” 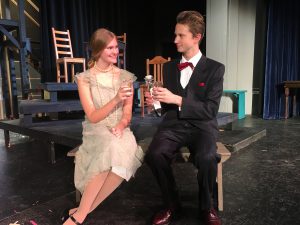 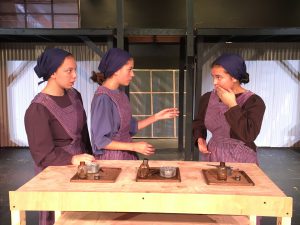 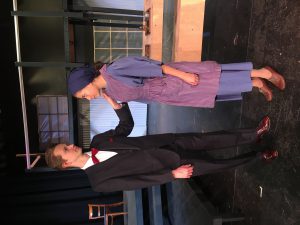 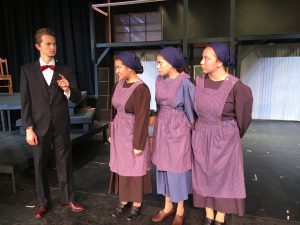 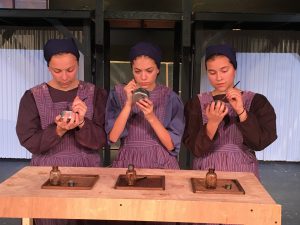 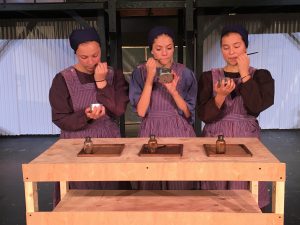 Written by female playwright D.W. Gregory in 2000, Radium Girls was inspired by a true story. The play traces the efforts of Grace Fryer (Marisol Gonzalez) as she fights for her day in court. Grace and her friends Irene Rudolph (Stephanny Gheen-Regouski) and Kathryn Schaub (Josette Wynn) are dial painters at the U.S. Radium plant. The girls create the luminous watch faces that are all the rage in the mid-1920s by applying radium with paint brushes molded to fine points in their own mouths. Many of the factory workers fall sick, and one even dies, encouraging Grace to come forward with her story. Her boss is Arthur Roeder (Ryan Myers), an idealistic man who cannot bring himself to believe that radium, the same element that world-renowned scientist Marie Curie (Diana Giganti Dima) describes as a potential miracle cure for cancer, could have anything to do with the mysterious and horrifying spread of illness among his employees. As time goes on, Grace finds herself battling not just with the U.S. Radium Corporation as the company tries to prevent her from talking to the press but with her own family and friends, who fear the backlash that a quest for truth and justice often generates.

Radium Girls is a fast-moving, thought-provoking piece with an ensemble of twenty-one actors who play forty different parts—friends and lovers, relatives and bystanders, attorneys and doctors – all of whom play a role in Grace’s story, a story that is ultimately a celebration of individual courage.

In explaining her choice for this year’s production, Weber said, “This play really spoke to me, as it is an interpretation of actual historical events. Women dial painters working for the U.S. Radium Corporation in 1917 thought they’d been offered the best job of their lives, only to end up dying for the company.”

“What I love most about this play is that the students are bringing to life real people whose voices weren’t heard one hundred years ago but are here to teach us today. The mistakes made for commercial gain are so incredibly obvious to us now and yet are eerily being repeated all around us. My hope is that the students will recognize this and have a greater appreciation for these women — and others — who suffered, fought, and stood up for their rights to bring us many of the freedoms we have today, and they themselves will become advocates for truth and justice,” she added.

The curtain goes up at 7:30. Tickets can be purchased at the door; prices are $5 for students and senior citizens and $8 for adults.

After a highly successful first marking period, the holidays are approaching, and our hard working students are nearly 3 weeks into the second grading term. We are proud of the efforts of our students and staff to begin the school year, and we expect the hard work and achievement to continue.

Below you will find important information and different events/activities upcoming over the next several weeks. We hope you find this informative and helpful to supporting your student this school year.

Thank you for all of your support of Kennett High School! Please know that we strive every day to do all that we can to help our students have the best learning experience possible!

Congratulation to the Seniors for claiming the 2019 Powderpuff victory.

In the first round, the Freshmen were victorious over the Juniors while the Seniors defeated the Sophomores. In the final battle, the Seniors defeated the Freshman with a score of 36-7. It was a great evening of sportsmanship and fun. The evening was made memorable by the musical accompaniment from the Marching Band. The music filled the stadium while the ladies played. Congratulations again to the Senior girls and their coaches on the well deserved win. Special thank you to the faculty, administration, families, and class officers that made this night possible. Make sure you join us for next year’s match! 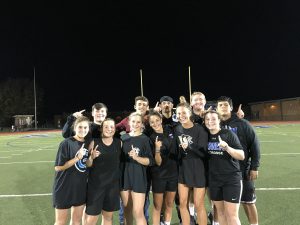 Class of 2020 players and coaches 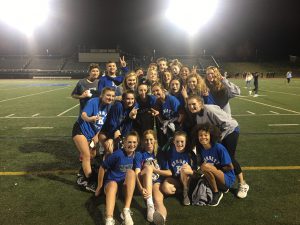 Class of 2023 PPF players and coaches