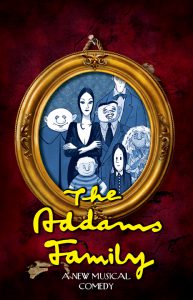 Due to concerns for public health and safety, our production of The Addams Family is being moved to the following dates:

If you have already purchased tickets, your tickets were automatically moved to the corresponding show date.

If this is a problem, please email Katie Soukup at khsmusicaltheatre@gmail.com  or call the school at 610-444-6620 and leave a call back name and number.

Thank you for your cooperation. We look forward to a great show in April!!

With book by Marshall Brickman and Rick Elice and music and lyrics by Andrew Lippa, The Addams Family was the most popular high school musical production in 2019, according to the latest rankings from the Educational Theatre Association. The original show made its debut on Broadway in 2010.

The story, based on the popular TV series from the 1960s about a hilariously ghoulish family, features an original story that embraces both the wackiness and the joy that exists in every family. A grown-up Wednesday Addams (Hannah Pirestani) falls in love with Lucas Beineke (Luke Sandusky), a sweet, smart young man from a “normal” family. Wednesday confides in her father and begs him not to tell her mother. Now, Gomez Addams (Tejis Ranganath) must do something he’s never done before: keep a secret from his beloved wife, Morticia (Allie Hodges). Everything will change for the entire Addams family, including butler Lurch (Robby Rauscher), brother Pugsley (Sylvia He), Grandma (Diana Giganti Dima), and Uncle Fester (Justin McAndrew), on the fateful evening they host a hilarious dinner for Lucas and his parents, Alice (Josette Wynn) and Mal Beineke (Ryan Myers).

Ultimately, the powers of love and acceptance triumph, and the Addams family learns to embrace the inevitability of change along with some of life’s most comforting truths: there truly is no such thing as “normal,” and “different” is something to be celebrated.

Music director Guenevere Calabrese Finley and stage director/choreographer Becca Calabrese have worked together to create an experience that is truly fun for the whole family. Rachel Brunke and Vicki Petersen serve as the show’s costume coordinators, and Michael Anastas will manage the sound and lighting crew.

Show times are Thursday, Friday, and Saturday at 7:30 PM. There is also a Saturday matinee at 2:00 PM. Tickets may be reserved in advance or purchased at the door.