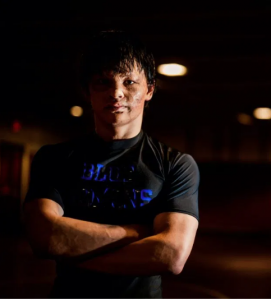 Each time Paul James Pebly gets his arm raised after a win on the wrestling mat, it’s an affirmation of how far he’s come.

Winning on the mat is hard, but each time Pebly’s arm is raised, there, clear for everyone to see, the extra struggle is evident.

When Pebly was an infant in the Hunan Province of China, he was found abandoned on the steps of a police station. He was badly burned, leaving scarring on his face and resulting in the loss of his fingers and parts of his hands.

Last Saturday, after pinning Chichester’s Tymeir Bush to take third at 152 pounds in the District 1-3A West tournament, Pebly’s forever-altered arm was lifted and his repaired face was held high. The boy, who helplessly survived a disaster he can’t even remember, had punched his ticket to the 3A Southeast Regional tournament

“It was a goal I had at the beginning of the his year,” Pebly said. “I’m just happy that I can show that anything is possible if you just work hard.” 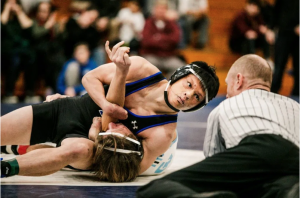 The two-day regional tournament was held at Souderton High, with the top five finishers from each class advancing to the state tournament the following week.

Pebly is not expected to qualify, but then again, his life story screams of overcoming odds.

“It’s an obstacle, of course,” Kennett coach Kevin Reigel said. “But he’s looking for over, under or a way around it.”

After being discovered by the police in China, Paul James was put in an orphanage for four-plus years until he was adopted by Steve and Jen Pebly, when he was six.

“Looking back, it’s a blessing because they’ve supported me with everything I do,” Paul James said. “They give me the motivation to do stuff that I didn’t think I could possibly do.”

In his elementary school years, Paul James joined the youth wrestling club, but after a few years, gave it up. His friend, Trent Kochersperger, talked him into coming back out in eighth grade.

“I just told him, ‘you’re strong, we need someone like you and you’re not a chump,” said Kochersperger, who will also be competing at regionals for Kennett.

Wrestling gave Paul James a venue to compete, but he took his lumps early, going 4-12 as a freshman.

Paul James has adjusted, figuring out ways to set up his headlock and working on getting better on top with the use of his legs.

Paul James is not blessed with the perfect circumstances to wrestle, but he does not let his circumstances dictate what he can do.

“He just pushes,” Kochersperger said. “In this sport that’s what you have to do to survive. It’s like the jungle. You gotta do what you gotta do to survive and you can’t make excuses for yourself. He doesn’t make any excuses for himself and I respect that a lot about him. It’d be easy for anyone to just give up, but he doesn’t.”

When asked if Paul James was a source of inspiration for his teammates, Reigel paused for a second, but simply stated, ‘no.’ This is who Paul James is, and it’s always been who he is, to the rest of the Blue Demons.

“If you asked all the kids on the team, I think they would sit there and go, you know, actually that is pretty darn impressive,” Reigel said. “It’s not really a daily thing. He’s just one of the wrestlers. … If he’s going with Trent, Trent’s going to rip a headlock and Trent’s gonna do what he does and Paul James can’t hand-fight him. I don’t think they treat him any differently.”

That’s just the way Paul James likes it. In a world that can get a little cold or lonely if someone doesn’t look like everyone else, wrestling has been a big of part of Paul James finding common ground and openness, in his new home.

“I struggle with that a lot, but I’m fortunate to have friends and be surrounded by people who give their love to me and support me,” Paul James said. “(The team) became part of my family. They just encourage me every day and tell me to keep my head up when I’m feeling down.”

Story by Nate Heckenberger via PAPrepLive.com on 2/27/20