Kennett High School senior Rónán Gorman, like so many of America’s students, was looking for something to do. His pre-pandemic days were incredibly full; between a demanding academic course load, the Demon Robotics team, swimming, and track and field, he had very little free time. But with all of his club meetings and competitions cancelled, he found himself especially missing the Robotics shop and the hands-on work he did there.

Soon after stay-at-home orders were issued in Pennsylvania, Rónán heard about the dire need for personal protective equipment (PPE) for healthcare workers nationwide. Using his Computer-Aided Design (CAD) abilities, he decided to 3D print “ear savers” that he first saw on Facebook.

“The ear saver is just one solid piece, so I knew it would be easier for me to print and distribute quickly to as many people as possible,” Rónán observed.

Rónán’s ear-saving device attaches to a facemask and eases the discomfort of wearing that critical piece of PPE for extremely long hours, day after day by achieving a tighter fit even on smaller heads and relieving the pressure of the mask’s weight on the wearer’s ears. Once he determined his production strategy, Rónán then planned to donate his ear savers to medical personnel, first responders, and other essential workers serving the Kennett community. Gauging interest by reaching out to family friends who are nurses or doctors, he soon had several requests for the device. Word traveled quickly via social media after he delivered his first batch, and in a matter of two or three days, Rónán was printing ear savers nearly around the clock on his one 3D printer. 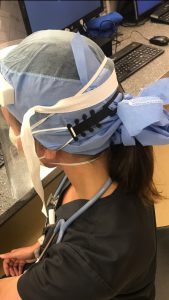 Each ear saver takes approximately 20 minutes and about 5 grams of filament to print. As weeks passed and demand increased, Rónán reached out to two friends on the Robotics team, Nate Judd and Rio King, who also have 3D printers. Together, they have been able to produce enough to help meet the community’s needs.

Rónán accepts no payment for his ear savers, taking on the cost of the filament necessary to print the equipment himself. Instead, he asks recipients to “pay it forward.”

“I’d like people to make a donation to the KACS Food Cupboard or some other organization in the community,” Rónán said, “but I also ask people to just pass the word. The goal is to keep the people who are putting their own lives at risk safe right now.”

Christina Gorman, Rónán’s mother, believes that the person Rónán has become is “a direct reflection of the influence, experiences, and education from his 13 years as a student at KCSD.”

“The combination of Rónán’s involvement with the Robotics Team and STEM courses, along with Kennett’s high standards and requirements for community service, developed his natural interest in looking at today’s challenges, identifying a problem or need, then using creativity and technology to come up with a solution. He put that into action by donating his time and resources to help others,” she added.

At some point along the way, Rónán lost count of the number of ear savers he was producing. But, he can confidently say that several hundred have been printed and donated to Chester County Hospital, Lankenau Hospital, Christiana Hospital, the Covid ICU at Riddle Memorial Hospital, A.I. DuPont Nemours, doctor’s offices, veterans’ homes, the KACS Food Cupboard, the local farming industry for hands-on staff, and many other organizations and facilities. 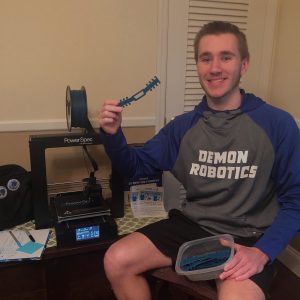 This fall Rónán will be attending Rochester Institute of Technology to study Mechanical Engineering Technology with an interest in renewable energies. Rónán currently holds three Kennett High School swimming records in relay events and plans to swim for RIT. He has earned top merit as well as STEM-related scholarships.

Each one of the devices that Rónán prints and donates represents a true dedication both to his principles and to his passions. In these unprecedented and often stressful times, his ingenuity and his kindness have brought comfort to many on the front lines of the fight against Covid-19 – in particular, to their ears.

Update: Please Click Here for the published article in the Daily Local